A Deeper Meaning Behind a Timeless Tradition 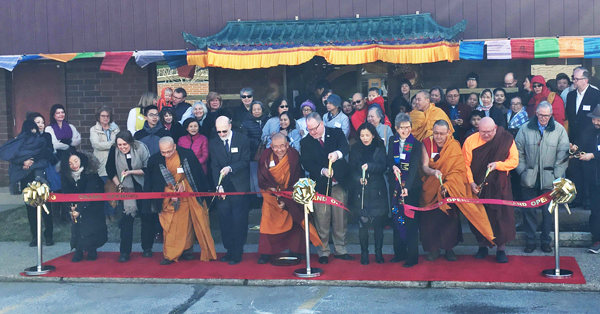 Ribbon cuttings have always been a symbolic representation of new beginnings, which is why they have become the usual practice for the opening of a new business. However, from the traditional Buddhism perspective, there is a much deeper meaning behind the timeless tradition.

Pure Land of Iowa, a non-profit organization promoting inner peace, compassion, harmony among people, and community, opened a third addition to their Buddhism center in Clive, Iowa on March 18 and 19. The center had originally housed two halls: Pure Land Hall of Chinese Chan and pure land tradition where traditional Chinese Buddhism is practiced along with yoga and meditation, and Earth Treasury Hall of Japanese Zen, which offers classes for children to study and learn about the culture. They now have opened Wisdom Hall, which will serve Tibetan Buddhists.

With the addition of Wisdom Hall, Pure Land of Iowa is the only Buddhism Center in Iowa to provide Chinese, Japanese, and Tibetan practices all within one location. Their grand opening event was as unique as their center, complete with a giant tangka, a Fire Puja Ceremony, and a very symbolic ribbon cutting.

Pure Land used gold scissors and red ribbon for their ribbon cutting, both for specific reasons. The gold color of the scissors represented the true nature of the Buddhist’s minds which are as pure and bright as gold, while the sharpness represented the function of the mind which is both strong and sharp. Red ribbon was used because the color symbolized a world full of hatred, ignorance, and other negative emotions that limit those that live in it. The idea behind this ribbon cutting was that the wisdom from the Buddhist’s pure, bright minds would eventually cut off all negativities in the world.

Just as the ribbon was about to be cut, administrator of the organization Hui Feng announced, “Now, on this auspicious occasion, let us take the golden scissor of wisdom and cut off all negativities and obstacles, and open a new bright future for our lives.”

Congratulations Pure Land of Iowa on the opening of Wisdom Hall, and thank you for letting us help organize and orchestrate your successful grand opening and ribbon cutting event!