Business Week - Entrepreneur of the Year Finalist - May 2001 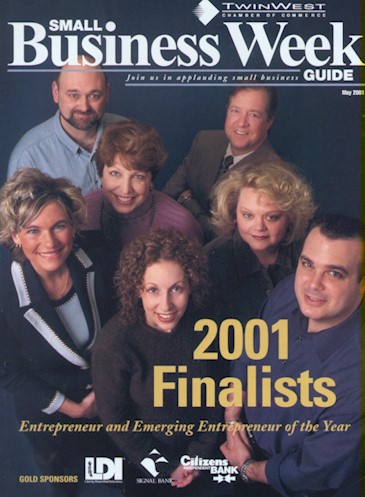 With each new hotel, restaurant, bank and business that goes up Golden Openings snips another ceremonial, red ribbon.

Over the past four years, owner Kimberly Baeth has left her company’s golden mark around the Twin Cities and surrounding areas. The company has planned, organized and decorated over 200 Grand Openings since the company began in 1997. Working with the client, the company handles everything from invitations, food, decorations and attractions to bulk mailings, celebrities, press releases and rental items. "With mailing labels of every business and resident in the Twin Cities, it’s hard not to have a good turn out at our events," says Baeth.

As a member of 12 chambers of commerce, including TwinWest, Baeth has countless business contacts all over Minnesota. The idea for Golden Openings came when Baeth, then Membership Services Director at North Hennepin Chamber of Commerce, received endless calls asking for the ceremonial scissors, ribbon and several other items for grand openings. She suggested creating such a service to the chamber board, but members rejected the idea for lack of resources. Baeth drew out a pattern asked her father to make the big scissors that really cut and started her business.

"I had two clients before I left the chamber," says Baeth.

Baeth is the perfect example of an entrepreneur who carved out a niche and ran with it. Although grand openings make up a majority of their jobs, they also plan groundbreakings, business anniversaries, retirement parties, trade shows and other special events. Her energy, enthusiasm and creativity have earned her constant praise and referrals from clients. The business does no formal advertising - its work says it all. "People notice our special touch," says Baeth, Golden Openings' only full-time employee. One intern and up to 20 part-time employees - most working on an as-needed basis - help with events.

"I thrive on getting businesses out of the starting gate. Frequently, I find that business owners don’t have the time to organize their grand openings. I love seeing their excitement when the event comes together."

That enthusiasm will soon spread to other states. Baeth is in the process of franchising Golden Openings, with interested people in Colorado, Iowa and Georgia. "The need for grand opening help is everywhere," said Baeth. "It will happen; it's just a matter of time."

With a husband and two children under age 3, Baeth's family life is just as busy, but she still finds time to volunteer in chamber and community activities, train & run in marathons, and keep up the family & business scrapbook. She credits some of her success to her computer consultant husband, who in his spare time handles Golden Openings' technical, accounting & Web site needs.

“It takes a lot of persistence [to get the right people there],” Baeth said. “But the business owner shouldn’t have to deal with it. They should be treated like a celebrity, not a host.”

And with each event Baeth organizes, the experience she accumulates could be an appealing factor to other new businesses, said Greg Schneider from the Small Business Development Center at the University of St. Thomas. “It could be very helpful for start-up businesses to gain from the experience Golden Openings has had with events they have done for other businesses," Schneider said.

Baeth predicts Golden Openings’ revenues to be around $100,000 this year, but she is not exactly sure - her husband, Kevin, does most of the company’s accounting in his free time. Baeth said she would like to see the company continue to expand in the next five years, possibly into two other states, such as Iowa. But, she added, she will need her family time. “I’m not into working around the clock.”