From Blender Parts to State-of-the-Art 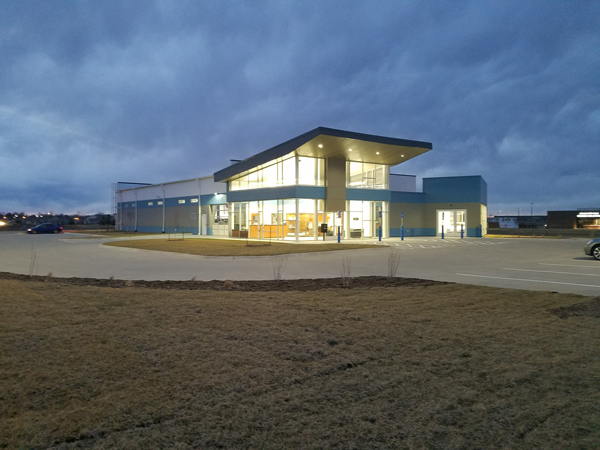 On March 30, 2017, Shade Tree Auto cut the ribbon for their new, 12,000 sq/ft state-of-the-art facility. Placed near a common interstate exit in Grimes, Iowa, the new repair shop is closer and more convenient for many of its customers, and has an additional seven hoists to improve turnaround time. It’s clear that the business has come a long way from the single garage repair shop that it started as, and owner Clint Dudley will never have to rely on a blender to fix a car again. Yes, you read that right – a blender.

One winter before Clint had begun his own repair shop, his brother, Russ, was getting ready to drive from their home in Manchester, Iowa back to school at Iowa State University. It was colder than usual for that time of year (which is saying something, this is winter in Iowa we’re talking about) and when Russ went out to heat up the car for his journey back, he found that the fan was not working on his temperature controls, meaning he had no heat and the windshield wouldn’t defrost.

Clint made a few basic checks and found that the blower motor had worn out. No part stores were open on this cold Sunday afternoon, and upon dissembling the car’s motor, Clint found that all he needed was another motor that he could steal a few parts from to fix it. He decided to give it a shot using an older blender that his mom had in the basement.

Clint had no idea if this makeshift motor would work, and things didn’t seem too promising when Russ flipped the switch on the fan producing an awful noise. Clint motioned for his brother and dad to speed up the fan and while initially the noise got worse, within seconds the grinding noise became a whisper as the new parts settled into place. “I think I did a pretty good job of playing it cool as I closed the hood,” said Clint. “The truck was already starting to push warm air across the windshield, and I was hearing cheers and laughter from the other side of the garage.”

Even after his impressive fix, Clint still hadn’t considered opening his own shop. It wasn’t until he met with an accountant to discuss tax reductions for his first home in Johnston, IA that the idea for a business of his own was brought up. Clint’s new property had a separate garage and once the accountant realized that Clint was a mechanic for a local tire shop, he put two and two together.

Shade Tree Auto, named because of the massive maple tree that covered the house and garage, started taking jobs for friends and family in 2001. It didn’t take long before the customer base grew, and Clint knew he had outgrown the small garage when he woke up one morning to a car parked on his front lawn. “People were starting to ask questions,” he said.

In 2005, Shade Tree Auto moved to a shop in Grimes. The new facility allowed for the business to work more efficiently, but its growth continued and 11 years later it was time to move again. Today’s shop will help Shade Tree Auto better carry out their mission of helping its customers make the most informed decisions regarding their vehicles, and promise repairs the staff can stand behind and customer service that exceeds expectations. “While we don’t fix cars with blenders anymore, the principle is still the same,” said Clint. “Find a way to take care of the people that take care of you.”