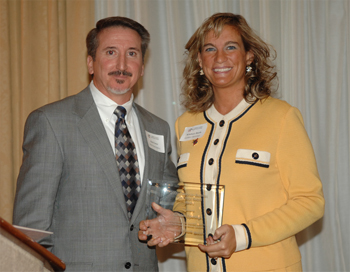 Golden Openings is truly a Best Kept Secret because the company’s goal is all about making others look good. When a new hotel, restaurant, bank or business opens and a ceremonial ribbon is cut, there is a great chance that Golden Openings helped make the opening successful, in some way, shape or form. Owner and founder, Kimberly Baeth, got the idea for her company while working at the North Hennepin Chamber of Commerce in Minnesota and realizing how many companies needed help organizing their grand openings and events. For her 26th birthday, she asked for and received – from her father, two pairs of life-size scissors that actually cut, thanks to ingeniously placed razor blades, and in February 1997, set out to start her company.

Today, Urbandale-based Golden Openings is a one-stop shop for supplies and services utilized in grand openings, ribbon cuttings, ground breakings, key to the city events, and more. While working locally to average four events per week, the company also serves thousands of entities around the world, largely through its website. In 2008 alone, more than 10,000 businesses purchased items for their events or called upon Golden Openings for advice. They also have three franchise offices that serve the broader US for event coverage and on-site details.

In addition to many Fortune 500 companies, the White House, Oprah, Governor Arnold Schwarzenegger and many others have ordered supplies from Golden Openings. Scissors from Golden Openings have also opened the Macy’s Thanksgiving Day parade. Locally, the company has helped organize special events such as the recent Homemakers Grand Opening with Warren Buffett and the Waukee Family YMCA Grand Opening.

Today, the company employs two full-time people and many part-time people that all work behind the scenes to help other organizations shine.