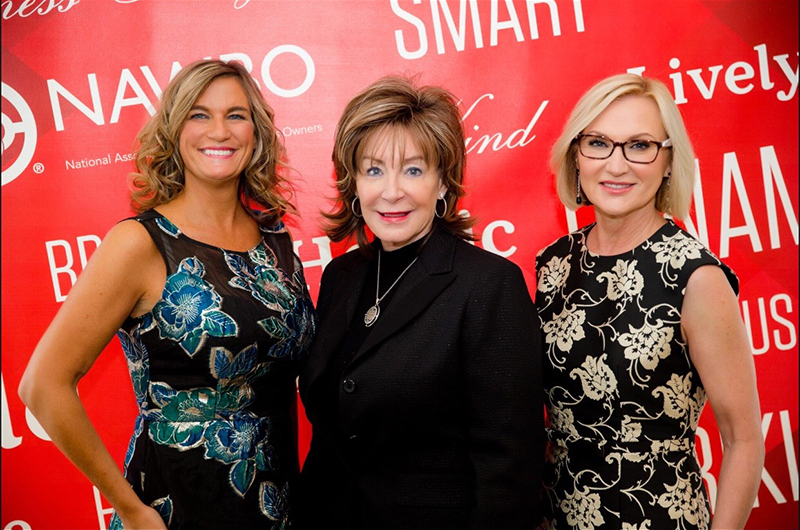 URBANDALE, Iowa – The National Association of Women Business Owners (NAWBO) Celebration of Excellence Awards Luncheon was held on Thursday, Nov. 8th, 2018 at the Glen Oaks Country Club. Kimberly Baeth was honored as the NAWBO 2018 Iowa Woman Business Owner of the Year. This award honors one outstanding NAWBO Iowa woman business owner who has used creative initiatives to overcome obstacles, generate economic impact, grow a successful and sustainable business, and improve the community. Kimberly’s entrepreneurship, enthusiasm, and compassion has been noticed. Last year Baeth was also recognized as a top 3 National Finalist Award Winner for the National Woman’s Business Owners Association award in Minneapolis.  Also honored at the event—Barbara Crowley with the NAWBO Iowa Hall of Fame Legacy Award, and Karen Taylor as the NAWBO Iowa Advocate of the Year Award.

“Where on earth can I find giant scissors that really cut?” Kimberly Baeth was asked this question while working for a chamber of commerce. Giant scissors that cut seemed like a simple idea, but it was a unique novelty at the time. So, Kimberly drew a pattern and asked her dad to construct huge scissors that actually cut.

Utilizing these giant scissors to help businesses celebrate their grand openings, Kimberly started Golden Openings, Inc. in 1997. On the way home from the three-week early arrival of her daughter, Kimberly stopped at her very first grand opening.

Shortly thereafter Kimberly invented the original giant stainless-steel scissors that cut. Her business specializes in grand openings, ribbon cuttings, ground breakings, and special events. Golden Openings now has over 10,000 products including wide custom ribbons, big bows, keys to the city, keepsakes, and several other unique awards and gifts for special events. The company ships out hundreds of packages daily all over the world and has grown an average of 34 percent each year for the past 21 years.

Kimberly speaks to many groups, inspiring them to achieve cutting edge success in life and business. She has written three guidebooks and authored a book called Guerrilla Grand Openings, which is soon to be published. She has been featured on ABC, CBS, NBC, and FOX TV, plus had articles published in the New York Times, the Washington Post, and more.

To help her community heal in 2016, Kimberly assisted in creating the Central Iowa Blue Ribbon Campaign, plus donated 35,000 yards of blue ribbon to grieving residents and businesses. Her company also coordinated pick up sites for ribbon distribution and group outings, to tie ribbons around trees and lamp posts. The entire metro area was covered in blue ribbons.

Kimberly and her husband, Kevin, have two daughters, Stephanie and Emily. Along with being heavily involved in her children's schools, sports programs, swimming and activities, Kimberly is an avid triathlete and runner and has completed two half ironmans, six marathons, including Boston, and has raised over $10,000 for charity with Team in Training.

The National Association of Women Business Owners (NAWBO) is the premier national organization representing the interests of all women entrepreneurs in all industries. The association works to:

Create innovative and effective changes in the business culture